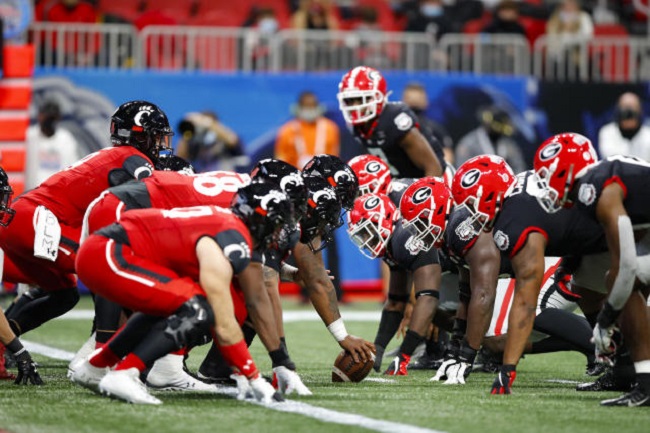 The Bearcats jumped out to a 14-0 lead over Tulsa on a day when college football fans around the country got a televised postcard from Cincinnati before sputtering in the second quarter, pulling away, then sputtering again.

With time running down, Tulsa’s chances would come down to two possessions that were both thwarted.

The Bearcats defence stifled the Golden Hurricane four times in a row after they fumbled away their last chance for victory.

UC beat Tulsa, 28-20, on Homecoming thanks to a fumble recovery in the end zone off of Steven Anderson’s final rush. Senior Jabari Taylor came up with the ball.

Now undefeated, Desmond Ridder and his Bearcats team have a perfect 9-0 record. Ridder completed 15 of 23 throws for 274 yards and two scores. Since Jerome Ford was hurt late in the first half, he also led the team in rushing with 43 yards and a touchdown.

Alec Pierce, a Senior, had Five Receptions For 113 Yards and a Touchdown.

Darrian Beavers, after two consecutive goal-line stands, commented, “We train for that.” “To prepare for this, we run drills. When the game seems to be finished, and it happens suddenly, that’s when we train.

Things are what they are. It’s imperative that we’re always ready to take the field. When the pressure is on, we step up our game.”

Though they may not have been the most stylish team, UC nevertheless managed to win enough games to keep their perfect record intact.

Bearcats head coach Luke Fickell emphasised the importance of victory. “We are not going to conform our actions to the standards set by others. We could all use a little bit more of this or that.

Our soldiers had to deal with a lot of changing circumstances this week, including a lot of momentum and a lot of new developments. We were put to the test, especially near the end zone, but we were able to rise to the challenge and win the game.”

“We are happy to be just a little part of the action the spectators will get to watch today,” said John Hart, owner of Start Skydiving and founder of Team FastraxTM.