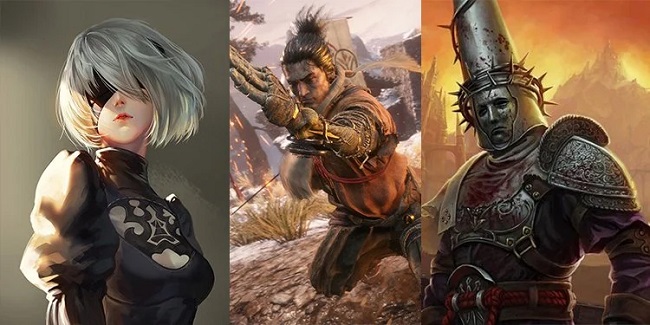 For the majority of people, gaming is the newest form of entertainment. It is popular among people of all ages as a way to unwind and enhance their virtual experience.

There are a plethora of video games to choose from. Dark Souls, on the other hand, has recently grown in popularity. Yes! In fact, it’s quite popular among teens because of its active role-playing and fascinating mysteries.

This game was developed by FromSoftware. Because of the game’s popularity, they decided to release Dark Soul II and Dark Soul III, each with their own unique set of features to keep players interested.

The game has been around for over a decade at this point. The good news is that if you’re getting tired of it and hoping for another thriller game along the lines of Dark Soul, it’s finally coming.

Here are the best 10 games that can compete with Dark Soul in terms of fun, entertainment, and thrill while also satisfying the gaming needs of those who enjoy the genre. As the action gets underway, be prepared.

For PC and Xbox One

Ashen is an open-world action RPG developed by A44 and published by Annapurna Interactive that tells the story of a rambler on a search for a place to call home.

This game has a lot in common with Dark Souls and can provide players with a similar level of excitement and adventure. Ashen doesn’t hold back when it comes to putting players in harm’s way, whether it’s through hostile opponents or ancient beasts.

And the graphics for the world’s atmosphere are spectacular, thanks to their unique art style. Combat levels are difficult and varied, and they rise in difficulty as players complete tasks and earn rewards.

Also, the game’s soundtrack is a great fit for the mood of the game. As a whole, it’s a fantastic game that could easily compete with the likes of Dark Souls.

William Adams is the inspiration for the character Nioh, an action role-playing game. Tokugawa Ieyasu granted a very high title to a foreigner who became a samurai under Tokugawa Ieyasu.

Developed by Team Ninja, it was released by Sony Interactive Entertainment in collaboration with Japanese publisher Koei Tecmo.

This is based on the concept of Japanese history as a whole. Every time you play, you’ll be energised by the game’s incorporation of authentic Japanese weapons and historical events. It may not have the same plot or gameplay as Dark Soul, but it is unquestionably on the same level as it.

What would it be like to play Dark Souls in outer space? There is a solution for you, and it’s very much like the experience you have while playing The Surge. It was developed by Deck13 Interactive and published by Focus Home Interactive for a variety of platforms, including the PlayStation 3.

In terms of story, the quest for the exoskeleton is the driving force behind the majority of the characters you’ll meet in the game, and the tone shifts dramatically as you progress through the campaign.

If you’re looking for a challenging game that provides a great deal of satisfaction, this is the one for you.

4. Awakening of the Dead

As the successor to Dark Souls, the action RPG Demon’s Souls has proven its worth by providing gamers with an enjoyable experience. With the help of Sony Computer Entertainment and Altus USA, it was created by FromSoftware and released in partnership with the former.

Using a tool called Nexus, a hero travels to five different worlds, where he kills his enemies and gathers resources. As the story progresses, the danger level increases due to the inclusion of death and sabbath.

If you’re looking for a game that will keep you entertained for hours on end, this one is for you.

In a dead cell, a unique gaming distinction makes this game amazing because it is based on the RogueVania model. Developed and published by MotionTwin is a video game.

Players in Dead Cells take control of a failed experiment, which places them in the position of killing zombies and other enemies while avoiding death and injury. Although the graphics of this game aren’t as impressive as those of some other games, it still provides a fantastic experience for the player.

Titan Souls is an action-adventure video game based on the Titan conspiracy that is currently available on Earth. Additionally, it was created by Acid Nerve and released by Developer Digital.

Titan Souls are the deep source of its storyline, which is based on Earth and all of the living things that inhabit it. Having only one life and a single weapon (an arrow) to use, this game is much more challenging and exciting to play than most.

Shadow Die Twice is based on the action and adventure genre in Japan and is a Japanese fiction video game. It has a rich history and culture from Japan. By Activision and developed by FromSoftware, it is a game.

It is up to you, the “alone-armed wolf” of Sekiro: Shadows Die Twice, to protect the kingdom’s bloodline by rescuing a young lord from a variety of enemies in order to preserve the kingdom’s heritage.

All of the weapons and locations in the game are based on Japanese history, so you’ll learn more about the country’s culture as a result.

Those who enjoy the Dark Souls series may enjoy Salt and Sanctuary, which takes its inspiration solely from that game. By Ska Studios, it is a role-playing video game. Weapons and shields are used to defend the kingdom and the princess in the game.

In combat, shields are a necessity. In this game, armour matters, unlike Dark Souls, so if you’re going for a heavy build, you’ll need good armour. In addition, you’ll have to put in more effort because your skill set will be more demanding.

If you don’t, you’ll pay the price in the long run. In addition, the game’s gameplay and visuals are widely praised by critics and gamers alike.

Available on the following platforms: Nintendo Switch, PC, PS4, and Xbox One

One of the most well-known games is Hollow Knight, which is frequently hailed as a masterpiece. Because of its excellent gameplay, it was named “Game of the Year” in 2017. Team Cherry developed and published this Metroidvania-inspired video game.

A warrior or knight is the focus of the story. He is on a mission to uncover the truth about the kingdom’s unsolved mysteries in order to protect it from evil spirits. Despite its simple appearance, the game’s gameplay is well-suited to its visuals and soundtrack.

A sequel is in the works because of the positive feedback gamers have given the original.

Bloodborne, an action-RPG developed by FromSoftware and published by Sony Computer Entertainment, is very reminiscent of Dark Souls in concept.

As a result, the plot revolves around a character moving from one location to another, killing various enemies, and finally arriving at the final destination after numerous obstacles.

Once you get into it, you’ll never want to put it down. Playing this game is one of the most frustrating but also rewarding experiences you’ll ever have. When you finally beat the boss you’ve been stuck on for days, you feel like you’ve accomplished something great.

When you start playing a game, you’ll find yourself constantly moving. In addition, it has high-quality graphics that set it apart from the competition.

In the end, a game like Dark Souls is nearly impossible to replace. As a result of the lasting impression it has had on gamers for more than a decade.

However, this is a list of games that serve as Dark Souls substitutes. In order to get the same kind of experience and atmosphere, these games can be extremely important.

Due to the rise of consoles like the PS4, Xbox, and others, video games have become increasingly popular. Most of the people who use it are in their twenties or thirties. Finding a game that fits your style and preferences is extremely important. There may be some value in this article for you.