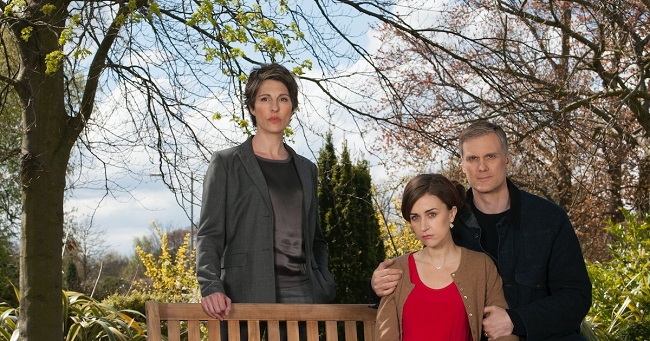 In The Guilty, Jake Gyllenhaal plays Joe, a former cop who’s been demoted to answering 911 calls and who gets a call from a young woman named Emily (Riley Keough), who appears to have been kidnapped.

Joe hears the call and deduces that the abductor is driving a white van. Emily acts as though she is conversing with her daughter in order to pass along information that will aid the police in locating her.

The film has a suspenseful premise, gradually exposing details about Emily’s predicament and Joe’s history.

Does Anyone Know if the Events Depicted in The Guilty Actually Happened?

The quick response is “kind of.” The Guilty is a reimagining of a Danish film from 2018 called Den Skyldige (the literal translation of the title), which was supposedly inspired by real events.

Gustav Möller, the original film’s director, has stated that a real 911 call he heard on YouTube served as inspiration for the film.

The real 20-minute conversation that served as the basis for the film was made by an abducted woman who spoke to a 911 operator in code while sitting next to her abductor.

Can you Tell Me if The Guilty is Based on a True Story?

The Guilty is not based on a factual occurrence, but there is no question that incidents like the ones depicted do occur in emergency call centers.

However, it’s a reimagining of a Danish film with the same title (Den Skyldige), which premiered in October 2018 and is also based on genuine events. It has been said that filmmaker Gustav Möller was inspired to create the original film after witnessing a real-life emergency call.

Given how closely the plot of The Guilty mirrors that of the Danish original, one could argue that it is, in fact, based on a genuine story.

He continued, “What I felt listening to Serial was that with each episode of that podcast, my images of these individuals and settings will alter, because I will acquire fresh information about the suspect and the victim.” “We made an effort to incorporate that into the movie.”

The Guilty, available on Netflix, is a remake of a Danish film with some significant changes (such as the inclusion of raging California wildfires and an expanded history for Jake’s character’s assignment to 911 call duty).

The movies were both sparked by a real 911 call, but neither is based on a true story. Instead, the filmmakers exploited the genuine premise of an abducted woman offering clues to a 911 operator in order to create entirely fictitious storylines.

The raging wildfires and the fact that Joe was demoted to 911 operator after shooting someone while in uniform bring to light an especially topical subject of police abuse, both of which are addressed in the Antoine Fuqua-directed version.

The Guilty is loosely based on actual events and features fictional characters and plots.