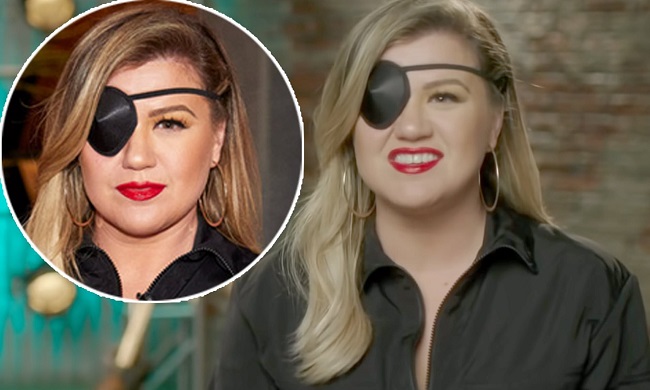 When Kelly Clarkson appeared on her talk programme in late September, she had a black patch over her right eye, much to everyone’s astonishment.

I apologise if I resemble a pirate. I had an accident and now I have to wear this awful thing because I damaged my eye. Kelly joked with Common, her guest this week, that it seemed like they were being interviewed by a pirate.

Later, she said, “I guess I’m simply going to make it my thing.”

Exactly What Happened to Kelly’s Eye?

The Voice coach provided further detail about her eye injuries in an interview with NBC Los Angeles’ “California Live.” Kelly has a dust allergy, and while filming for the latest season of The Voice, something must have gotten inside and caused havoc for her.

The Voice coach said, “Maybe cut it, did something.” A virus invaded it. Like something out of Hitch, have you seen that film? Kelly explained, making reference to the 2005 film starring Will Smith.

“It was puffy at first, and I remember thinking, ‘What am I supposed to do?'” She laughed, “I had to shoot ‘The Voice’ for a full day for, I guess it was Battle Realities, in a patch, and I was wearing all black since it was already the outfit that was chosen, and I looked like an assassin.

She also mentioned that viewers might be confused because the programmes are not aired consecutively.

The fact that we performed twice a day means that we presented six total concerts. It took three days for the patch to stop itching. She emphasised that “they are not consecutive, guy.”

“She has to figure out her eye condition,” people will say if I wear a patch “on a random Tuesday.”

Her diseased eye was puffy and red. The initial swelling in her eye almost startled her. She continued by explaining that she had to wear the patch during the day of The Voice filming since she had no other choice. Kelly Clarkson joked that the black eye patch made her look like an assassin because her “entire black attire” had already been picked out for the day.

When asked if she should keep the look moving into her next album, she responded, “I believe I’m just going to make it my thing—this is my whole album,” prompting the two to joke that it was really her entire record. This is the next album in my cycle.

During the premiere of Battle Rounds for Season 19 of The Voice, Kelly wore the eye patch again. When Kelly and her team’s coach, Leon Bridges, walked into the rehearsal, Kelly explained the slight change in appearance.

She explained that her eye “got a little infected” after getting poked in the wrong place, which is why she was wearing the patch.