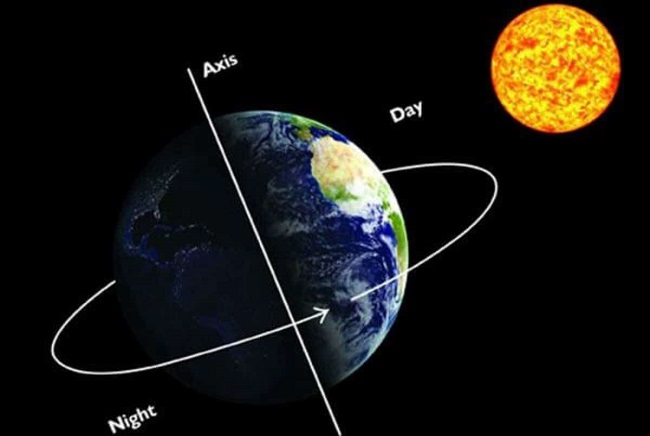 The rotation of Earth, often known as Earth’s spin, is the movement of Earth around its own axis, as well as the resulting shifts in the axis’s direction in space. The Earth moves clockwise around the Sun, or eastward. When viewed from Polaris in the north, Earth rotates anti-clockwise.

The geographic North Pole, also called the Terrestrial North Pole, is the latitude and longitude coordinates of the intersection of Earth’s axis of rotation with the planet’s surface in the Northern Hemisphere.

The North Magnetic Pole of the Earth is not at this location. Antarctica’s South Pole is the opposite surface point at where Earth’s axis of rotation meets the planet.

Earth Rotates in Respect to the Sun

The Earth completes one rotation in around 24 hours relative to the Sun, but in 23 hours, 56 minutes, and 4 seconds relative to other, more distant stars (see below).

UTC is being changed by leap seconds as atomic clocks demonstrate that a modern day is longer by roughly 1.7 milliseconds compared to a century ago.

The length of a day has risen by around 2.3 ms every century from the 8th century BCE, according to an analysis of historical astronomical records.

From where we were positioned over the North Pole, we could see that Earth revolves counterclockwise, or from west to east. A Prograde rotation is another name for this movement. The Earth completes one rotation in twenty-four hours, as is well known.

Since Earth spins clockwise around the sun, the moon, and the stars all appear to move in the other direction, from east to west, as seen from Earth.

The sun rises in the east and sets in the west for this very reason. Earth’s rotation produces day and night. From the North Pole, the star Polaris indicates the direction of the Earth’s rotation, which is from west to east.

The Sun Rises From East Due to The Rotational Direction

Because Earth is rotating from west to east, it makes sense that the sun “rises” in the east and “sets” in the west. Just before the day officially begins in North America, picture yourself on the sun’s surface, looking down at Earth.

Due to Earth’s rotation, sunlight reaches the East Coast first; this means that as New Yorkers begin their day, Californians are still in the dark.

Simply put, the sunshine that is already shining on territory to the east of us is travelling toward the lands where people live, and thus we may see the sunlight approaching if we turn our attention eastward.

In this solar system, the phenomenon known as the “big bang” is responsible for the formation of the planets.

Since every planet orbits the sun in an elliptical path, it stands to reason that the solar system revolves around the sun. All the planets orbit around the sun because of a gravitational pull.

Each planet also spins on its own axis as it orbits the sun. Aside from Venus and Uranus, all of the planets in our solar system spin clockwise around the sun.

Why Do Lizards do Push Ups

How Much do Squirrels Weigh