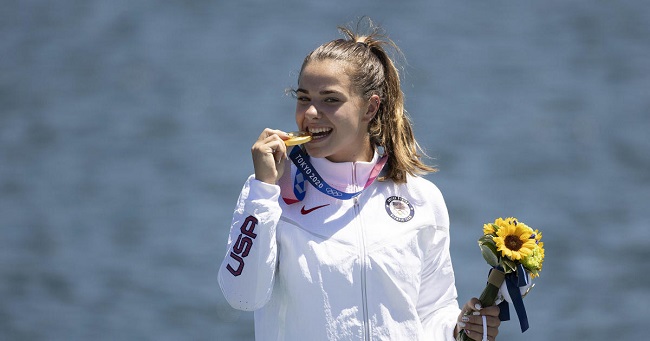 The 19-year-old was dominant in her race, paddling in just under 46 seconds and leading through most of it from start to finish. Harrison, who became world champion of the event at 17 years old, broke down in tears after her Tokyo Olympics victory.

So Grateful For My Support System.

In a post-race interview, the Seattle native said she was “speechless.” “This is crazy,” she said. “This is a dream come true. I’m just so grateful for my support system. My friends, my family, my coach … this is wild.”

“It’s been a hard journey because I didn’t have anyone to really follow in these steps. But I’m hoping I can be that person for the next generation in the US,” Harrison said. She entered the final as the current world champion and the strong favourite but still looked astonished after her victory.

“It’s Such A Crazy, Big Dream

“It’s such a crazy, big dream and it doesn’t ever seem like it’s actually achievable so crossing that finish line and looking around and seeing I was first was really surreal. Like everything I ever dreamed of as a kid,” she said.

The race under Tokyo Gate Bridge along a canal set between two artificial islands was anticipated to be a showdown between Harrison and a Canadian, Laurence Vincent-Lapointe, the C1 200m world record holder.

Harrison Was Just Too Strong To Catch.

They did finish first and second but it was closer to a procession than a duel, with Harrison winning in 45.932 seconds, 0.854 ahead of her 29-year-old rival. Liudmyla Luzan of Ukraine was third.

The Canadian’s quick start suggested a strategy to break the American early before Harrisons sheer power and steady but furious stroke reeled her in and passed her at the halfway point. Once in the lead, Harrison was just too strong to catch. She won by a half boat length before pumping her arms in victory.

Lapointe surprisingly didn’t qualify for the canoe 200 at Olympic trials, but Canadian officials her put on the team and entered her in a kayak event she doesn’t race. She then switched to her specialty race. Liudmyla Luzan of Ukraine finished third for bronze.

Vincent Lapointe could still win a gold medal. She is also scheduled to race the canoe double 500, where she and teammate Katie Vincent are favorites to win.

Lisa Carrington of New Zealand took her third gold medal in three days, winning the women’s kayak 500 in with another dominant start-to-finish victory. Carrington won the 200 and double 500 earlier this week and is still scheduled to race the 500 fours.

Thomas Green and Jean van der Westhuyzen of Australia won the men’s kayak double 1,000 meters at the Sea Forest Waterway with a finishing kick over the final 200.Mox Hoff and Jacob Schopf of Germany were 0.304 seconds behind to take silver.