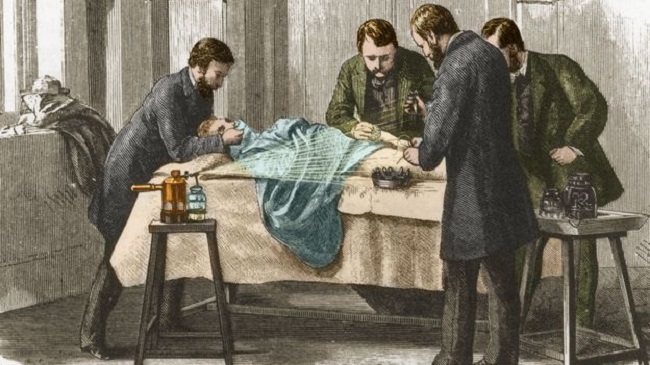 Historiographer Lindsey Fitzharris exposes the terrible reality of nineteenth-century surgery on the cusp of radical change in her book The Butchering Art. She imagines early operating rooms, a place no coward would go, and surgeons who, in the days before anaesthesia, were admired for their speed and raw power.

These forefathers of modern medicine understood that the risks associated with surgical recovery were often greater than the underlying disease, and they were perplexed by the intractable infections that contributed to the high mortality rates of their patients. Joseph Lister, a young, melancholy Quaker surgeon, stepped up at a time when surgery could not have been more dangerous to solve the lethal puzzle and alter the course of history.

Fitzharris gives a riveting account of Lister’s research, culminating in his bold assertion that germs were the cause of all infection and could be treated with antiseptics. She focuses on the turbulent years between 1850 and 1875, introducing us to Lister and his contemporaries (some brilliant, some outright criminal) and taking us through the dingy medical schools and hospitals where they honed their skills, the morgues where they studied anatomy, and the graveyards they occasionally ransacked for cadavers.

The Butchering Art is a chilling and enlightening look at the achievements of a pioneering surgeon whose drive to merge science and medicine ushered in the contemporary era.

Because of the high mortality rate associated with surgery, operating rooms earned the nickname “gateways of death.” It was a common practise for doctors to go through graveyards in search of cadavers so they could practise operating on patients who had suffered broken legs.

Fitzharris clearly portrays the postoperative suppuration that plagued patients before the advent of anaesthetic in the 1840s, which allowed surgeons to do longer, more difficult procedures. Fitzharris recounts the rise to prominence of Quaker surgeon Joseph Lister through the stench of Victorian London, Edinburgh, and Glasgow streets.

Books like Black Tudors by Miranda Kaufmann and Death in Ten Minutes by Fern Riddell, two of the most popular recent attempts to write history for a general rather than scholarly audience, present readers with something fresh and difficult. They make readers question the conventional wisdom about who has lived throughout time. Thanks for reading our article The Butchering Art: Joseph Lister’s Quest to Transform The Grisly World of Victorian Medicine.

How Many Houses Are In The World