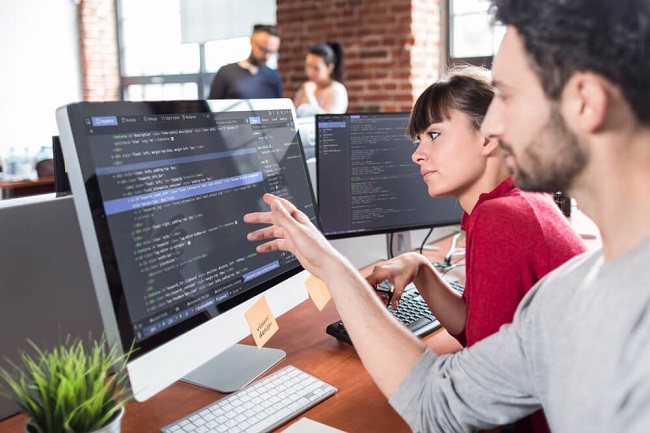 There are six major stages in the software development process, starting with the conception of an idea and concluding with the official release of the final product.

A software product’s development process can be thought of as a cycle. Although there are a lot of website development services available on the market, they must be sorted out.

A variety of work cycle models are available, including spiral, variable, and direct ones. Only the order of actions, logic, and interaction of stages is depicted in any model, not the essence of the process.

So, there are six basic stages in the development process, each of which follows the logical completion of the previous one.

Develop Specifications for the Software to Be Used

The first stage is important because it has an impact on the final product’s complexity. The more complex the requirements, the longer and more expensive the development cycle will be. The prepared data is what determines the software’s fundamental characteristics:

Forming a framework for future relations on prototype development and delivery is necessary at this stage.

The agreed-upon provisions are documented in writing at the end of the first stage of work.

The terms of reference, the documentation of the finished solution, and the wording of the act of priming the transfer of the software product remain the main documents. To get the best results, you’ll need an experienced business analytics firm.

For both the customer and the contractor, documentation serves as a valuable insurance tool. To ensure that the finished product meets the agreed-upon requirements, the document serves as a safeguard for the contractor’s interests, primarily in terms of payment guarantees.

The first point of contention between the customer and the contractor is the product’s aesthetics. Because of this, it is necessary to create multiple visual concepts at the same time in order to allow the customer to compare them and select the best option.

Front-end components include everything a visitor sees when entering the landing page, such as the user interface, page structure, service buttons, and banners.

Software modules that reside on the server-side are considered back-end components. Security systems, control and communication systems, algorithms and action scenarios, integration with the platform, and much more are all part of the back end development competencies.

To ensure that a working prototype is ready for testing, it is critical to conduct extensive testing. As opposed to reworking a product after its official release, it is much easier and more cost-effective to fix bugs while the product is still in use.

It is possible to conduct testing with a focus group of users when the product is tested on pre-selected participants and without the involvement of an operator – that is, only within the development team itself.

Preliminary testing allows you to ascertain the attitudes of the target audience toward both potential flaws and possible future marketing strategies.

The product can be released to the public after it has undergone rigorous testing. When the software is released in a limited version for a small group of customers, exit can be phased, or it can be full, with no restrictions on how large the exit will be.

It’s critical to keep an eye on the big picture when entering the mass market, so that you can make timely adjustments, add new features, and solicit feedback from your target audience.

Providing marketing and technical support is a form of back-up support. It’s difficult to manage a project and change people’s attitudes if communication is poor.

It is difficult to cut or loop the basic stages of the software development lifecycle because they are common to all IT products. In some cases, the emphasis should be on testing, while in others, marketing support should be the primary focus.