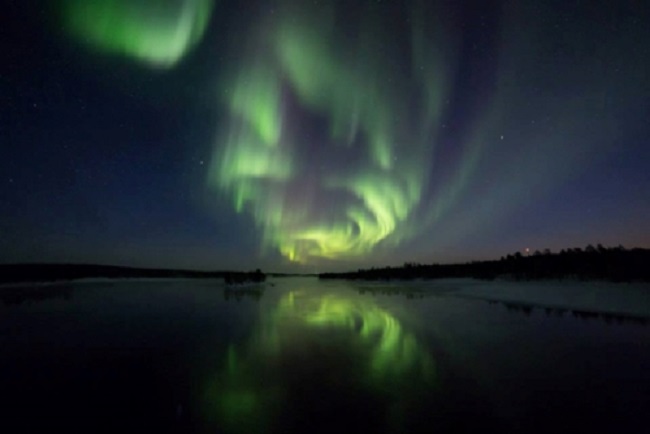 It has been predicted by the Geophysical Institute at the University of Alaska Fairbanks that anyone in a wide swath of the Northeast, from Seattle to Maine, and as far west as the state of Washington, may be able to see the northern lights over the Halloween weekend.

Millions of Americans Could View the Northern Lights as Early as Saturday Night, Depending on Weather and Other Variables Like Light Pollution.

Northern regions of the United States, including New York, Maine, North Dakota, Michigan, and Wisconsin, and all of New England, may catch a glimpse of the lights, according to the Geophysical Institute.

The Geophysical Institute predicts that “very active auroral displays” will be visible from the skies above Portland, Oregon, and New York City, if conditions permit.

The organisation also claims that locations much further south may have a possibility of seeing the lights low on the horizon. Carson City, Nevada; Oklahoma City; and Raleigh are all examples of such places.

According to the Space Weather Prediction Center of the National Oceanic and Atmospheric Administration (NOAA), a G3 (strong) geomagnetic storm is expected as a result of the solar flare and ejection. An intense storm like this one can actually drive the Aurora away from its typical viewing location above the North Pole.

The NOAA has forecasted that those in the Pacific Northwest, the high Midwest, and the extreme Northeast may all get to experience the Northern Lights this year. NBC News also claimed that several states, including Montana, Michigan, and Wisconsin, are getting ready for a rare spectacle.

The aurora borealis is caused by solar particles carrying electric charges colliding with oxygen and nitrogen in Earth’s atmosphere. Because of this, you can typically find them well above the North (Aurora borealis) or South (Southern Cross) magnetic poles of Earth (Aurora australis).

Why Do We See Auroras?

The Northern Lights have always left me wondering what triggered them. The Aurora Borealis is caused by charged particles from the sun colliding with gaseous particles in Earth’s atmosphere.

The collisions of different types of gas particles produce a wide range of colours. Detailed explanation: What triggers the Northern Lights, exactly?

On Thursday, the sun released plasma in the form of a coronal mass ejection and solar flare, increasing the likelihood that the Aurora Borealis would be visible. This Halloween weekend, you can expect a sky full of witches.

On August 23, 2016, at Erikslund, Vaesternorrland County, Sweden, the night sky was lit up by the Aurora Borealis.