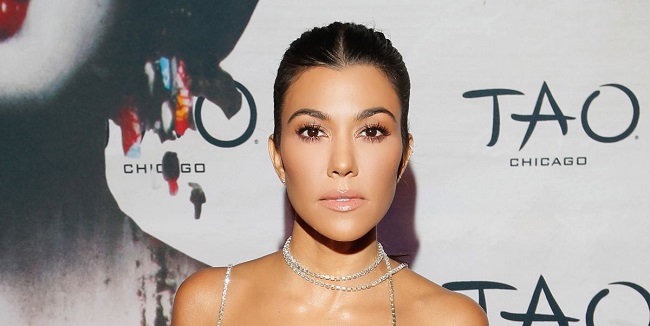 Fans have noticed that the 42-year-old actress’s style has become edgier since she started dating Travis Barker, drummer for Blink-182. Poosh, the firm owned by the reality personality, shared a selfie the celebrity had shot on Tuesday, showcasing an outfit from the brand’s most recent collection.

Kardashian wore a sheer blouse with a green and black color-fade that exposed her body, along with a black leather skirt and green fluffy heels in the photo. The actress censored the sexually suggestive photo with emojis.

Since the beginning of this year, Kardashian has been dating Barker, 45. The ex-reality star has been posting images from a recent PDA-filled date with the singer.

In the caption of the picture, she encouraged readers to “Swipe for happy girl,” alongside multiple photos of herself beaming broadly and stylishly dressed in a hotel room.

Kardashian was seen smiling and holding Barker’s hand as they walked down a hall. Barker put his tattooed hand on his girlfriend’s foot in the last shot of the post.

The Instagram Stories of the Hulu Star Revealed the Photo.

The happy couple poses for a photo in front of Au Lac, a vegan Vietnamese restaurant in Los Angeles’s downtown. Travis, 46, makes a goofy expression while wearing a black sweatshirt and vest with metal studs.

Kourtney smiles and poses in a see-through crop top that reveals her bare breast. Kourtney posted a fresh photo to her Instagram Stories last week, shocking her fans with her apparent preference for openness.

On Monday night, the reality star posted a photo of herself in front of her closet mirror.

The TV star wore baggy boyfriend jeans and a white tank top that was so sheer that her black bra showed. Kourtney topped off the outfit with removable black sleeves and posed for the camera with a sultry glam look.

Kourtney, the eldest of the sisters, recently shared a post on Instagram in which she asked her followers a contentious question. Do I cut my hair again or do I grow it? (the day I chopped it), she pondered in the caption. Sure, it’s a minor concern, but I bet most of us have thought of something similar.

In Kourt’s defence, she seems to naturally experiment with new hairdos. The possibilities are endless when one has a personal glam team at their disposal. Well, I can’t say I blame them; if I were a Kar-Jen (in a past life, perhaps), I’d probably take advantage of their business connections, too.

Kourtney also uploaded a slew of throwback photos on her Instagram Story, showcasing a variety of her former hairdos.

The following inspiration pictures are provided in the hopes that they will assist you in responding to Kourt’s important inquiry. Thanks for reading our Article Kourtney Kardashian Divides Fans With New Look in See-Through Top.