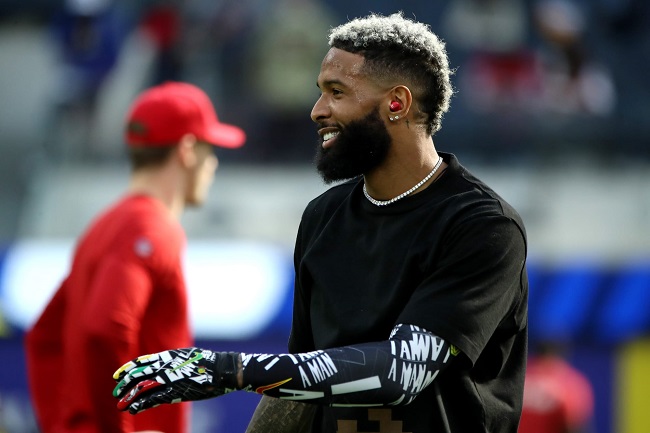 After the unsuccessful stay with the Browns, the word broke that the team had released Odell Beckham Jr., prompting many Falcons fans to wonder if their team should claim him off waivers.

Many supporters want to see OBJ in red and black, but whether or not Terry Fontenot will actually make that happen is another matter entirely. Cordarrelle Patterson, the team’s standout player, tries to woo OBJ to Atlanta.

Cordarrelle Patterson is the only NFL Player Actively Recruiting Odell to Join the Falcons, But he isn’t the Only One.

Although Patterson’s intentions are honourable, his efforts will likely go unnoticed because the Falcons lack the financial resources to sign the former star receiver even at the veteran minimum. Despite the fact that there are always options for teams to reduce their cap footprint, doing so typically results in a heavier financial obligation in the long run. The Falcons’ current financial predicament is the direct result of decisions like these in the past.

Even though Odell would be a huge boost for Atlanta’s receiving corps, it wouldn’t be smart for a team with the NFL’s lowest cap room to sign him. The Falcons are currently 11th on the waiver wire, and several of the clubs ahead of them are in much better salary cap shape than the Falcons would be if they were to get Beckham.

Even in his little time in the NFL, wide receiver Odell Beckham Jr. has seen a lot of different squads. He has never been regarded as the best locker room guy, even by his fellow players, whether he was with the Giants, the Browns, free agency, or the Rams.

Even though he was out on Sunday due to a non-contact injury, he demonstrated the kind of teammate he has become. Beckham Jr. did not leave the field to receive medical attention, instead remaining on the sidelines to cheer on the Rams until fellow teammate Aaron Donald sacked Cincinnati’s quarterback Joe Burrow and clinched the Super Bowl for the Los Angeles Rams.

The Rams’ GM, Les Snead, has made no secret of his desire to re-sign Beckham to a long-term contract. Of course, the team also wanted to keep pass rusher Von Miller, but Miller signed a six-year, $120 million contract with the Buffalo Bills on Wednesday night.

For quarterback Matthew Stafford, the Los Angeles Rams have stocked their receiving corps with three Pro Bowlers. The reigning Offensive Player of the Year, Cooper Kupp, has a deal that runs through 2023. Robert Woods, who tore his ACL shortly after Beckham was signed, has a contract that keeps him in the NFL through 2025.